Long ago, I had an amazing t-shirt - so good, I wanted to make more like it

I had a t-shirt once

Actually, I've had a t-shirt more than once, but this particular t-shirt impressed me a lot. It didn't lose its shape, the neck didn't stretch (a pet hate of mine for crew-necks), the design didn't seem to fade and the comfortable fabric was a decent weight, not flimsy designer tat.

This meant it easily endured the evil abrasive forces of being twisted and twerked about under my bike leathers (you'd be amazed what I used to get up to in my bike leathers).

But where to get them? I couldn't find them anywhere. So, at last, I came to the inevitable conclusion: I had to make them myself...and show them to the world: 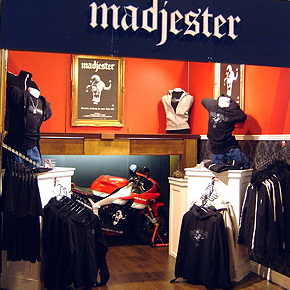 Our first appearance at the Birmingham NEC bike show in 2007

...and so it began: the company was formed in 2004. It's crunch time: we endeavour to make the best garments we can, even having forensic assessments performed on fabrics to identify the ones we want for our range. Then, a splurge of creativity and frenzy of photoshopping to determine the design before we get the first 'prototype' back from the factory. A few tweaks, and the final order is commissioned - our garments are on the way!

A few weeks later we get a lot of boxes. A LOT. A very good day indeed, and following our tentative steps for t-shirty world domination, we have our first appearance at the Birmingham NEC bike show in 2007.

Since then, we've continued to sell our clothing range online, which you lucky things can drool over in the online store.